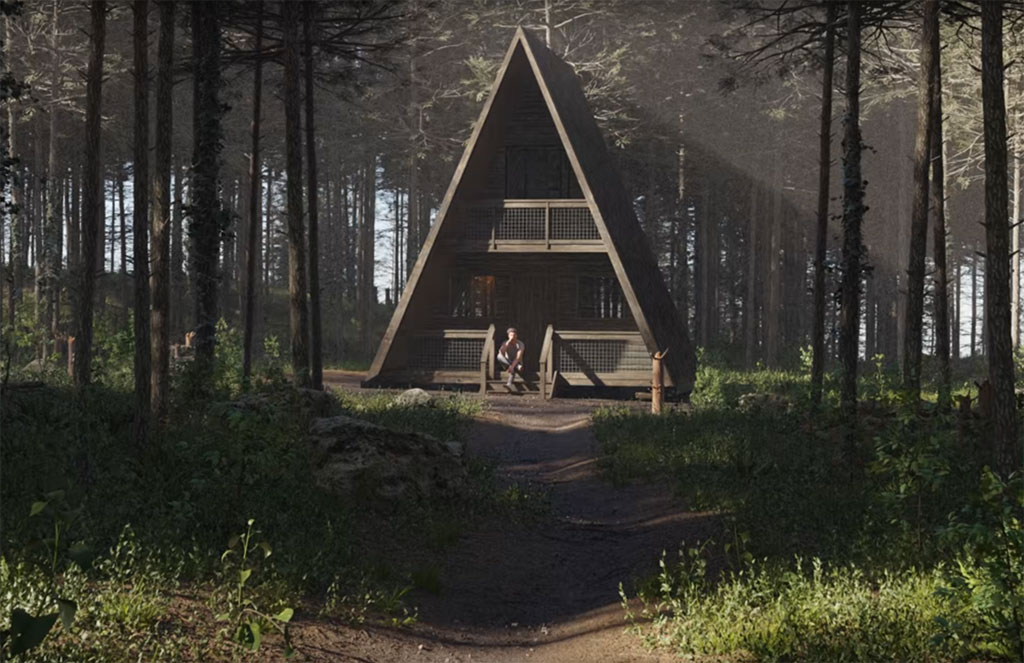 Most of the Blender and other 3D software tutorials cover the individual elements of the workflow. There are tutorials about modeling, about rigging to character skin, character creation and animation in general. But the effect of our work is the entire 3D scene. Therefore, the most substantive tutorials are those about building the entire staging.

BlenderGuru is creating very interesting tutorials about Blender. Everyone knows his popular YouTube videos, especially the series “Making Donats” which are viral.
However, it is worth checking out his more advanced tutorials on creating an entire scene. One of the most interesting is “Making Cabin in Woods in 15 mins using Blender”:

Let review it. As always, we can learn about the different Blender tools and texturing techniques. Some may not like the fact that he uses ready-made models again and the whole scene creation is kitbashing. But the tutorial is about something else.
On the other hand, if we discuss how to model individual elements, the whole recording would take hours, and that’s not the point.

You can understand the use of ready-made tree models – nowadays nobody makes such models by themselves. Most often you buy ready-made models or use free sets.

There is also a Blender plugin called Scatter, with which we can easily scatter objects in our scene.

The plugin is paid and can be found from the link above. This is quite a powerful tool (in fact a whole set of tools). There are very interesting solutions using “ID Maps” or “Abiotic Factors” useful for mapping models on mountains slopes and other landscapes.

In this tutorial, this plugin was used of course to create foliage in forest. The effect is very interesting and it is worth getting acquainted with this plugin and its use.

Other elements are ready-made models downloaded from places such as BlenderMarket or Github.

The entire composition of the scene is a simple building of cabin, with an uncomplicated shape located in the forest. There are trees and other vegetation around.

The tutorial demonstrates working with 3d models imported to Blender, using tools to manage them and of course the above-mentioned plugin. Thanks to this, we also learn the entire composition of the scene, arranging objects in the scene.

The final stage of building the scene, when the whole composition is ready to be lighting and ready for rendering. BlenderGuru did not show the lighting methods, we only have presentations of the renderer settings. This is a bit surprising, the tutorial should cover everything.

The standard Blender settings are fairly simple, though, and everyone should be able to deal with them.

It is surprising how much time the author spent on completing the entire scene (weeks?). Overall, however, it is a simple kitbashing from ready-made models.

The whole scene is not too complicated exterior, especially since we use ready-made solutions.

If you are interested in other Blender tutorials, see our list of other extremely interesting tutorials (internal link).

Not only for beginners, but also for intermediate Blender users. The tutorials are so detailed that users of other programs such as 3ds max or Maya will also benefit from them.