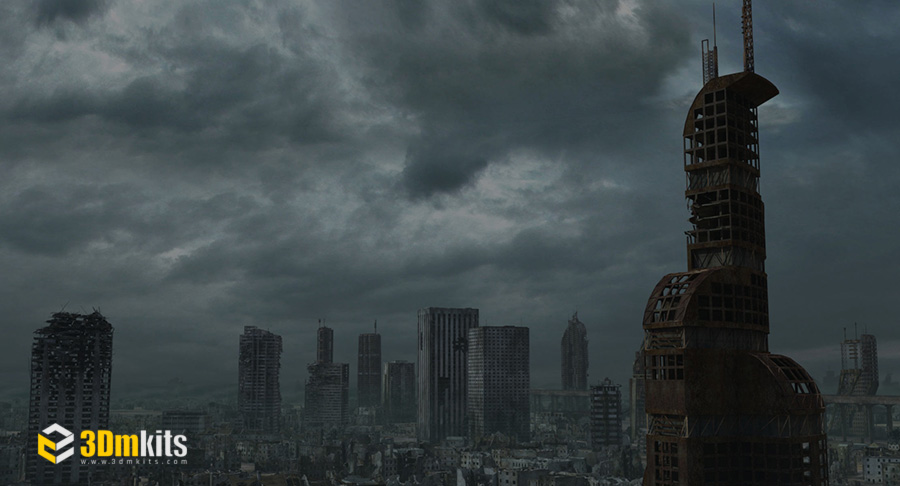 How to make a ruined city street?

Creating 3d models is not as easy as preparing a regular business card or a simple photomontage in Photoshop. Even if you know the basics of 3d graphics and create simple 3d models, remember that the entire agglomeration scene is a much more difficult thing.

Often the best idea will be to use ready-made 3d scenes, or even destroyed building 3d model, which will significantly speed up the work on the project.

A typical city 3d scene has the following structure:

This is the average city scene, see below for more information:

Ruined city street as a based model

Streets, most often with attached sidewalks, are the basic models of such a scene. They are the foundation of the entire construction site. It is thanks to street 3d models that you build the entire structure of the city. They are the template for place buildings.

How to model such model? Usually, such models are not difficult to make, they are simple, low polygonal designs. However, when we want to perform something like this for the scene of a demolished city, it looks different. A simple model becomes much more complicated. There aren’t many details, but the mesh itself and the way it is modeled is problematic.

Generally, the best method is to simply build a regular city street model – and then rework it. It usually looks like this:

TIP: the best way to do that is use Havoc or Reactor tool. If you are using Blender or Maya you can use additional plugins,

The most important element of the city are buildings. If you decide to model a ruined city yourself, you have to remember that they are different from ordinary buildings, which usually lack a lot of details.

Destroyed buildings are models similar in structure to streets. Again, the best method is to start with an undamaged object model and then convert it to destroyed version.
Workflow looks similar. We remember about good texturing, divide the mesh into segments to facilitate editing and add cracks.
It’s also a good idea to scatter debris models on floors – exactly the same method as on destroyed streets.

Ready-made 3d assets are most often used for large projects, such as video games or special effects for films.