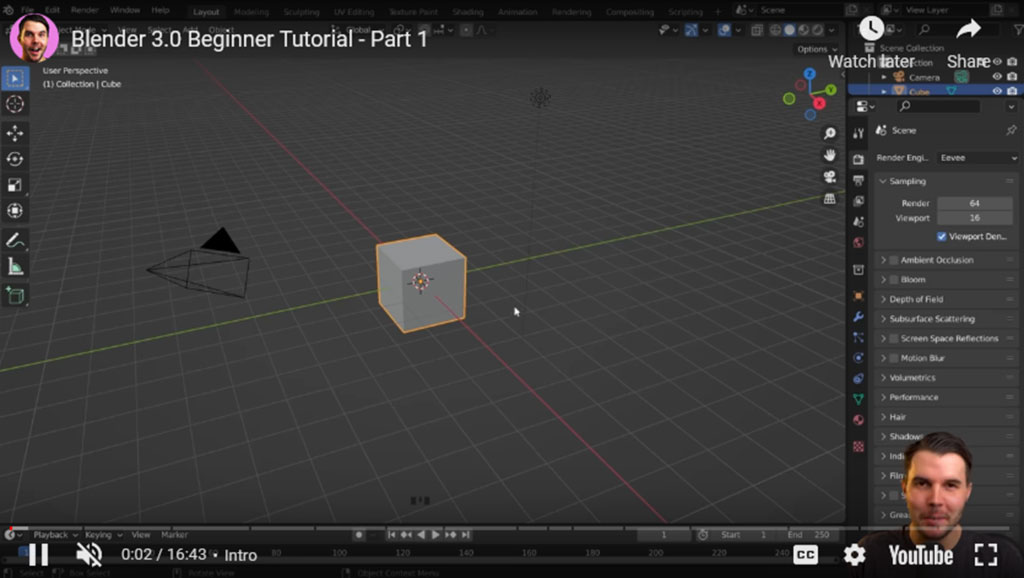 Blender users specialize in a variety of things. Some people want to create animations, some want special effects. Whatever we do, the basis of work in the 3D program is modeling.

3D modeling is not a simple thing. The technical foundation is one thing, but the experience is another. Fortunately, the Blender community produces many tutorials to help you learn this difficult art. One of the coolest things about Blender is its large fan community. Fans of this program have been creating learning resources for two decades.

We have prepared for you a short overview of the most interesting tutorials for Blender users. We also took into account the level of complexity.

Do you want to learn the basics? You know Blender but want to start modeling? In this case, you have to meet the Blender Guru. He is the most popular YouTuber about Blender. You could also say that he is also the most competent.

Blender is famous for presenting modeling techniques on simple products. But if you are a beginner you should definitely check out his donuts modeling tutorial.

The video covers things like the basics, moving objects – unfortunately it only shows you moving the base object. Not a model.
If you know the basics of using Blender, than you can skip this video, it is absolutely the basics. This is the first video in the series. We encourage you to watch the next parts.

The tutorial consists of a series of 12 videos.

2. Making a Cabin in the Woods – compose a scene

Another great tutorial from Blender Guru.

We have published a very detailed review. We encourage you to read this article. You won’t find much information about modeling there. However, there is a lot of general information about creating an outdoor scene. Blender Guru uses ready to use asset 3d models. For scatter foliage models he used Scatter plugin.

Have you read Red’s post on CGI reports on Blender 3.0 ? Red complained a bit about a few things about the new Blender 3.0. Therefore maybe he should watch this interesting tutorial prepared by 3DGreenhorn.

At first glance, this is one of the many covers for basic options. However, 3DGreenhorn presents it in an accessible way. It is worth your interest. In the description of the film, the author provides interesting links to other courses. These are his and other YouTubers’ courses. In general, the author shows how to rotate and scale objects, and how to move them. These are basic object manipulations in Blender. All examples are made on basic solids, not models.

We start more serious and difficult techniques in Blender. Character modeling, one of the more difficult things, but it’s worth learning. From where? Of course, with tutorials. If you’ve already learned the basics of modeling, it’s time to try to create a character. Hard to find any 3d scene without characters, right?

In the past, characters were modeled using hard surfacing. Later, we could observe the development of the Z-Brush program. Building on the success of this program, others started publishing their own sculping 3d programs. If you use Blender, you have a 3D sculping tool ready. And it’s free.

This tutorial starts by scratching the overall body. We will shape the head from this basic body. On the basis of the basic body, you create new forms. Then you add elements like eyes, hair, eyebrows.
In the next part of the video, the author discusses how to make a shirt. It also deals with the topic of lighting and explains how to prepare the materials. Good tutorial, but for advanced users.
Interestingly, at the end, the author also explains how to prepare HDRI for background.

We can’t just focus on character creation. You will most often use hard surface modeling. What can be done with this technique? All 3d models with regular shapes – building 3d models, weapons objects for games and vehicles.
The talented CG Geek who is a YouTuber presents hard surface modeling on the example of the vehicle from Star Wars.
His Tie Fighter is a simple but complete model. The tutorial is in two parts:

According to the video, we start modeling with a sphere. This will be our central part of the spacecraft. It is a classic hard surface modeling – working on solids. We recommend it if you want to see how subdivision in Blender works.

It’s not just a spaceship. You can use this technique for various things. You can model a car or a ship in the same way (technique).

The second part of CG Geek’s tie fighter crafting tutorial is Materials and Rendering. In addition to modeling skills, you also need to be able to finish your 3d model.

After reading the second part, you will learn about UV Unwrap, texture and render finished model. Finally, you’ll add layers.

The above-mentioned tutorials about Blender 3.0 will help you get to know this program. You will learn basic tools and options and then move on to more advanced stuff.
In the video of Gureu Blender and CG Geek, you will learn the techniques of hard surface modeling. On the other hand, organic modeling by means of sculpting.
Finally, when you learn the secrets of creating a model, you will be able to illuminate it and render it.

You know how to work with Blender but you need 3d assets?

Nowadays, 3d graphics should be done quickly and effectively. 3d modelers create objects themselves, but most graphic designers look for ready-made solutions. 3d model stores offer lot of assets ranging from single models to collections. We recommend that you check the 3Dmkits offer for building scenes.

With the help of ready-made models of buildings, it will be easier for you to create outdoor scenes. Such as, for example, those presented in the Cabin in Woods tutorial.